The Grand’Anse has been the hardest hit region of Haiti. In 12 hours, Hurricane Matthew wiped out 80% of the region’s housing, 95% of its schools and the majority of its crops and trees. We are all having issues absorbing the magnitude of this loss and devastation.

It’s a privilege for me to be part of this Community Leaders Network. Their grief is mine. For the past few days, we’ve been communicating by phone, What’s app, email. We’re mourning. Amid all this loss, I take comfort in the people of the Grand’Anse. The wonderful leaders who make this region so
unique.

Here are some of them: 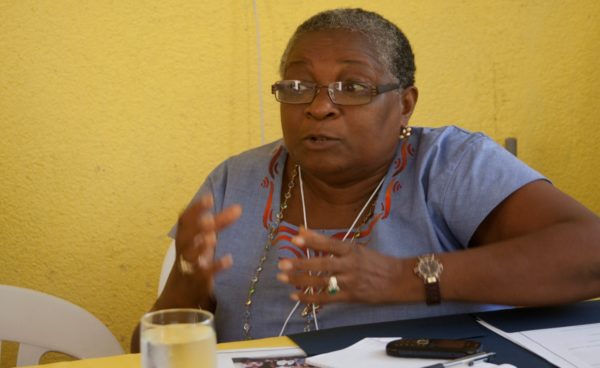 Concepcia is a powerhouse. A nursing professional, she came back to Haiti after 11 years living in Switzerland and working at a hospital as a Head Nurse. After founding the Nursing School in Port-au-Prince, she went back
to the Grand’Anse where she has her roots. Not being paid for months didn’t deter her from “whipping the hospital into shape” much to the delight of the community.

Concepcia called me two days ago: “Marie-Rose” she thundered ” Some international NGOs have been coming, snapping pictures and making it look like they are doing something”. She went on with her rant” I am not letting these people use us to make money”. ” How’s the hospital Concepcia” I asked. She rattled down the damages. “There isn’t a tree left standing” she added with a massive sigh. “You are still serving people, right?” ” Of course! ” She says. “Send me a list” I said.

Concepcia has a bed and breakfast that she’d expanded over the years. “How’s your house?” “The main house is Ok, but the bungalows have lost their roofs and they have some damage”. “Marie-Rose, I had 24 paying clients, I told them to leave so that I could give shelter to community families”.

That’s Concepcia for you, a general and a drill sergeant with the heart of a marshmallow, who takes care of her own at all costs. I wanted to ask her about her health (she suffers from diabetes and high blood pressure)”. No time…

“Marie-Rose, I’ve get to go to the hospital… I’ll work on the list.” I feel her pain. She doesn’t want to face it yet. Grief in action. 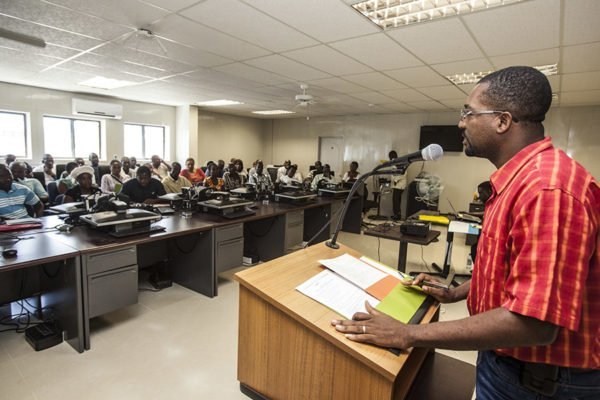 A lawyer and an agronomist who heads ROPAGA, an association of 68 peasant organizations, Alcendre is one of the most thoughtful leaders and managers that I know. He has a rare mixture of vision, commitment, humility, kindness, practicality and strategic thinking. He chose to stay in the Grand’Anse. Like all of us, his roots reach down all the way to the heart of our island.

Two night ago, he sent me a photo of what’s left of ROPAGA’s office, a welcoming building that used to be surrounded by trees. He couldn’t talk. “It’s so painful” I said “He didn’t answer. All I could do for now was to share his pain and articulate it for him. 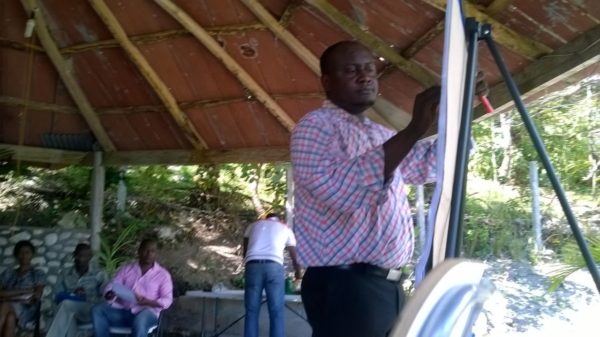 The more I got to know Wisly over the years, the more he impressed me. He’s only in early thirties, but he has such intelligence, substance, dynamism and strong character that you keep forgetting his age. He’s involved in a sandal manufacturing business and in various agribusinesses. He recently won first prize at a Caribbean business competition in Miami. I think that I might have felt prouder than he was!

He’d built very productive and profitable pepper and poultry farms. He’d developed a special and nutritious chicken feed with moringa and breadfruit that he said increased their egg production and probably their nutritional value. He and I were excited about it. I thought that we should get a researcher to document it… He called me recently and said that he was fine.

“How’s everything Wisly” I asked hesitantly. “You know that the plants, the chickens, all of this kind of things are gone, right” he very gently said as if to manage my feelings and trying to make the news easier for me. Such kindness and caring. My heart bled a bit more…

We are moving forward and WE WILL REBUILD! GET INVOLVED!

Thank you for your support,

ESPWA, the Haiti Community Foundation Network and the Grand’Anse Communities!